Ok, I blew it.  I recently had a fight with my domain server, and lost.  I ended up renaming my computer to work around it.  It’s never been a problem in the past.  Well, at least I didn’t realize it was.

ADMS is getting its content from an SQL server on a site.  That site is my computer, and when renamed, it was lost.  My entire ADMS and Vault was gone for all applications.

Autodesk had this to say about the errors

During the installation of Vault or Productstream Server (ADMS), you received the following pre-check error message:

This error is the result of renaming the computer or adding it to a domain while the previous version of ADMS was installed even though replication has never been enabled on this particular computer.

This can be resolved by uninstalling SQL 2005, using Add or Remove Programs (Windows), and then reinstalling it either manually or automatically using the Vault/Productstream Server installation.

Alternatively, you can run the ADMS Console in command line mode and use the -OSiteRename switch. For detailed instructions, refer to the ADMS Console Help menu (available by pressing the F1 function key).

This function will rewrite the server strings to attach to the libraries at the new site location.  I suspect there is access through  file or registry for this, but I am not sure.  The operation should be simple and the info online would indicate that it is.  Don’t be worried about the HUGE STRING command entry. Copy the entry examples shown in the links at the bottom of the page, into a text editor, and edit the option to what you have at your location.  Then it is easy to past it to the command dialog.

This did not work, but I wasn’t paying much attention while I was trying.  Something else was missing.  After the site change, I ended up trying to reinstall Vault Server.   After the client install, the ADMS checks were completed with warnings.  The warnings lead me to this, which stopped m dead in my tracks.  http://support.microsoft.com/kb/300956

Somewhere along the line I got creative, and well it won’t work.  I will probably have to reinstall SQL up to get it back.

D. Jeffrey is a wiz at Autodesk server installs, and suggested I back down to the desktop client.  So that’s what I did to get running.  I go my project completed, so not the end of the world, but my Vault installs are wounded.

I should have renamed my computer back, and prepared the server migration beforehand.

I should have stopped prior to installing the desktop content, and reverted my system to the previous day. I trid too many things and the control for the testing was gone.  Reverting to the prior day would have cleaned it up.

I should have performed the rename, and immediately went to reinstall the Vault clients and server.  This may have got it running, but since I got creative, well it’s impossible to know.  The –OSiteRename function SHOULD have worked, and should work for you.  You may have to restart the OS to get it going. 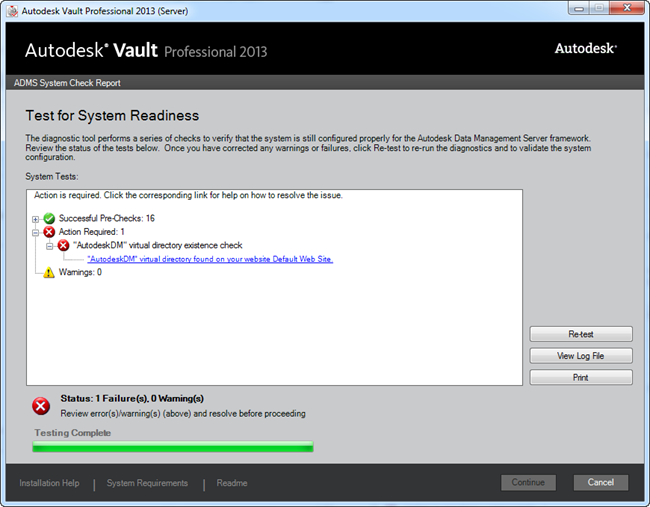